Here are some shots from July 9th’s monthly meeting. It was a great night with Henry and Jane Evans and Bob Bauer – who took us around the globe – Boston, Kansas City, Lyons (FR) and China – controlling 4 beam Robots real-time while we watched with our jaws dropping from the MTC Executive Conference Room! 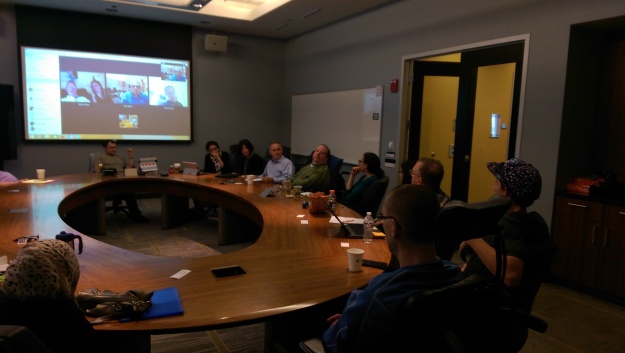 ITKAN members engage with Bob Bauer, VP of Suitable Technologies of Palo Alto and Henry Evans, founder of Robots for Humanity, at their July monthly meeting

Henry and Jane Evans of Robots for Humanity, Bob Bauer of Suitable Technologies, and ITKAN member Steve Luker join ITKAN’s July meeting on the Beam Robot and bringing the world to those who can’t travel via Skype in the MTC Chicago’s Executive Conference Room

ITKAN members watch a TED Talk featuring Henry Evans of Robots for Humanity. Evans sustained a massive stroke (CVA) leaving him with near complete paralysis other than modest head movements and limited gross motor movement of one hand. A former Silicon Valley CFO, Henry is now leading a global effort to capture robotic and drone technology that can enable people with severe disabilities and others to “travel the world” and visit cultural attractions. He sees no limit to the capacity of technology, coupled with human creativity, to create a rich and engaged life for all.